Before I long forget a few pictures from my visit to the UK.

Loved this pic which was clicked last year when I was on my trip to the himalayas.
A friend from there met me yesterday and gave it to me. 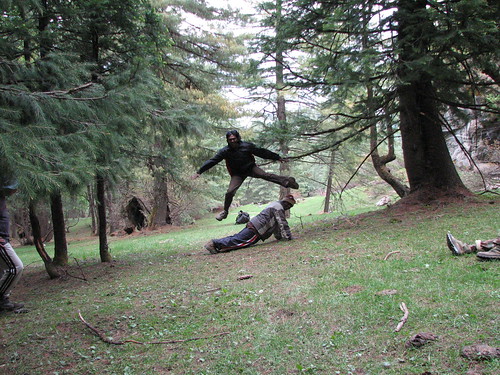 I wonder how life changes in a year. Was thinking of a Leh-Ladakh trip this year and all goes down the drain with this recession.

An awesome movie I must say. Excellent performances from the duo De Caprio and Kate Winslet.
It's a story about a couple who can't cope up with their mundane life and want to do something exciting but can never get out of the trap.

De Caprio is a small employee at a corporate and feels shit about his job. It starts showing elsewhere in his life, him taking out his frustration on wife and screwing around.
As a last hope Kate tries to convince him to move to Paris and start life fresh all over again. Just when everything seems to be working and they plan to wrap up things there's a sudden twist in the story that De Caprio is offered a promotion and a bigger pay and Kate gets pregnant.
Now the eternal confusion between an unkown risk or a known trap ?

Kate being fed up of the sucky life desperately wants to escape from it and the kid looks a threat to her ruining the complete plan.
She tries to get rid of the child so that they can continue with their plan. Now their life gets into a big mess with De Caprio willing to give up their idea of moving to Paris and Kate unwilling to accept the truth.

What happens and how the story ends is all about the movie.

I think if not with whole of the movie a lot of people around can relate to it in parts. People feel stuck with what they are doing but they don't have the courage to live up and try see what lies beyond.
The fear of failure or the lure of the cozy job gets to them and suppresses what they once thought were the things they want to live for.

Eventually they end up unhappy with themselves and those around. The guts to live the life as they want to isn't for the faint hearted and this movie showcases that in beautifully.
Two actors who gave one of their best performances De Caprio and Kate Winslet (I can't belive she looks so old so fast :). De Caprio seldom disappoints me.

A must watch for someone who isn't just looking for the usual slum dum melodrama.

Oh! where was I all these days ??
Hmm... Let me think. Don't know but am quite a bit bored and didn't even have the urge to write something.

Have taken a week's break and visited my native and all over Andhra (Godavari).

Was a great trip I must say. It was almost close to 4 years probably when I last visited my relatives. Dad and mom keep going there but I give it a miss.
This time however I accompanied them and had a great time rejoicing with my grand parents and other relatives.

Saw the majestic and beautiful Godavari, travelled over the Krishna river, feasted my eyes over lush green paddy fields, felt my heart leap over the nice scenic places.
Wish I had taken my camera along.

My New Years was spent on the run and I don't complain. It wouldn't have been any better otherwise.

As people around me know I don't make any resolutions. I generally can't think of any and can't keep up with the thought ones.
So its better that way. Taking things the way they come definitely helps.

2008 was a decent year, had a few ups and downs. Nothing to boast of but some pretty good to experience things.
Trekking to Himalayas was one. Planning for more this year. Lets see how it works out.

Its so irritating that wherever you go or whomever you talk with only have to say about the recession and job cuts.
Yeah its there and you can't ignore it but its too irritating to hear about the same stuff over and over. So and so laid off x number of people.
There are rumors such and such is happening.

Today is the release for Ubuntu Intrepid Ibex, the latest version of Ubuntu 8.10.
Since most of the time I use KDE, I am more of a Kubuntu user.

The biggest radical change this time was the inclusion of KDE 4.1 as the default KDE version.
KDE4 had pretty much mixed responses all over. Its stability being very questionable.
While the looks and the customizability it offers are neat, I for one am not very satisfied with it until now.

It always lets me down and seems to me like a half baked product. Things fail more often than the stable KDE 3.5
Actually I haven't been able to use KDE for a while now on intrepid since it freezes for some unknown reasons as soon as I login.
So now I am a forced gnome convert (which ain't bad. Gnome is a clean environment).

Thinking of a few other things which break one thing thats a stopper for me is evolution.
Even though its a pretty flaky product (when used with exchange) I was relatively happy with it on Hardy.
Work used to get done pretty much with it and I had my calendaring, email and decent search folders.

But with intrepid its totally broken. It no longer works with the https OWA url.
It works with a http though. Your corporation needs to support a plain version of exchange. (Luckily mine does)
Or you would have to go ahead with imap folders and forget your calendaring (which is one of the primary reason I stick with evolution).
So a major deal breaker.

Since I have been using it for a while, from the alphas I could say that the X window system has been pretty stable and infact much better than earlier.
Dual monitor setup pretty much works.

WiFi has been stable. I have been relying more on Network Manager since I need support for PEAP.
Its a pain to get it working otherwise with those custom packages of openssl and stuff.
There's one problem with it running with Network Manager though. If your X windows system goes down your network is down.

So all in all I can't say its a great experience on intrepid. But yeah I am on it :)
I wish KDE 3.5 is still available with intrepid but they just abandoned it.

Hope others have a better experience with it.

There rarely are good Indian movies, even the bollywood ones. (This is in my opinion)

One movie that is apart from them is the one released recently "Mumbai Meri Jaan"
An excellent movie I must say. Its a story of how life changed for four people after the train blasts happened.

Theres no extravaganza on the part of the actors nor the storyline. Its just tight and gripping.
No preaching, no extra sentimental scenes to pull the audiences but a reality check on the people, society who undergo the trauma.

I cringe whenever people say that Mumbai ki spirit, they spring to life within minutes etc.. blah blah.
Its just that anywhere people would rarely care about those who suffer and in the media its only the moments frenzy that matters.
Since they dont cover the life after the initial day or two of the blast we would never understand how their lives are changed.
People like us who have amnesia about things we dont like tend to forget all about them in a couple of days and go about our work normally since it didnt effect us.

I hate the media bas***** who put up a mike infront of the crying people asking about their feelings.
Soha who plays the journalist, thinks its perfectly alright to do that kind of journalism until the tables turn and she is in the others shoes.
Its all about sensationalism, who puts up news first without any concern to the person next to you.

And there is KK Menon who is a hindu who tends to believe that every muslim is a terrorist. (I have come across people like this if not to that extreme)
Reality is not the same. It dawns on him slowly that they are people very much like everybody else, have their own lives.
Good or bad exists irrespective of religion. Its the people who tend to go one way or the other.

Madhavan, who is an idealist who wants to stay in India irrespective of having offers to live abroad is shocked with the blasts.
Aftermath he is afraid to even board a local train. At one time he contemplates to move abroad and escape only when it dawns upon him that life isn't free of terrorism anywhere. There's 9/11 too.

And finally Irfan Khan is a complex character. He's a Tamilian who works in Mumbai.
Since he's rejected from the posh malls in Mumbai he tries to take revenge on them by making fake bomb scares.
Only when the life of a person falls in danger does he realize how extreme his actions are.

Thus everybody's life is effected but eventually people do move on.

Excellent performances by everybody. A must watch movie...

I am pissed off with the privacy laws in India.

Was having a good nap in the afternoon when I got a call from HSBC.
The summary was that one of my friends have missed paying his installment of personal loan. (He's not in India anymore and didn't leave the bank a number to reach him)
So they call me up asking if I can give his contact number. Surprise !

How do they know that I am a friend of his ? They look up at his earlier transactions, find out that I have transferred him some money earlier.
Since I am a HSBC account holder, no problem.. they can look up my account details, get my mobile number and call me.

wow! I mean wow... so much for my privacy. Anybody without a proper authorization can get my details by looking into my account. (And maybe tomorrow borrow some money without asking me too)
When I question the lady who called me up on my mobile how she got my details she explains it and when I say that it is illegal, she apologizes and ends the call.

I don't know where else and who else my account details reach unknown to me.

I just can't get this song out of my system.

Guess I first heard it in "Love Actually". And yesterday heard it yet again in "Four weddings and a Funeral".
Awesome song it is and the lyrics.

I wonder if some of the news channels do any kind of research before going to the print.
Just because it's online you can't print whatever the f*** you want.

Check this article from ibnlive about iPhone.

"The phone works on only cell phone signals from AT&T in the US. Therefore its usage value in India seems low."

Yes sir. Thats the reason they are partnering with Airtel and Vodafone in India.
Collapse